In my previous article I was explaining the swarming behavior of fish in a predator-prey system. There you can read about basic rules underlying the mechanism of swarm formation. The next step now is to make a computer simulation of such a system by using the Matlab software.

Without any previous experience with programming languages, this first step in writing a programming code is the most difficult one. How to define living organisms? How to make them move? Or how to tell them to form swarms? Answers to those questions will be presented in this article.

Assign specific characteristics to fish and make them move….

The Matlab program for this predator-prey system of different fish will consist of three main parts – “Parameters”, “Initial conditions” and the “Main time loop”. These are the sections where prey and predator fish are firstly defined and given some initial properties, such as location, direction of movement, speed of movement and instructions to form groups (to avoid the predator or to chase the prey). In this particular case, the initial distribution and velocities for both fish types will be random, enabling the fish to swim in all directions, instead of starting collectively in the same direction. In order to achieve a predator-prey dynamics, all forces of attraction and repulsion have to be defined among prey fish alone, among predator fish alone and also inbetween them. A simple linear force calculation based on the distance is sufficient to create the basic rule of swarming. The following figures represent different forces of attraction or repulsion between fish. 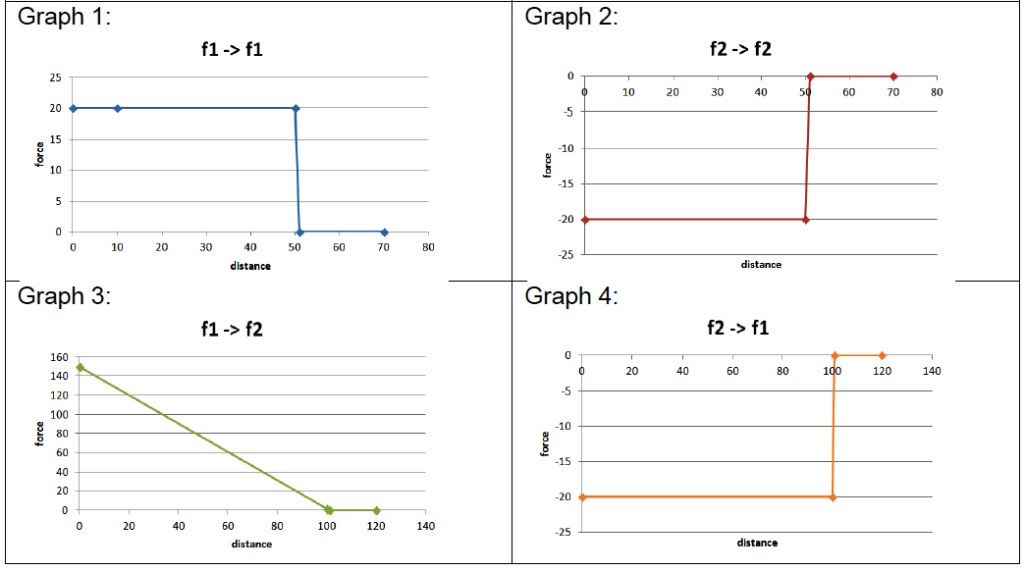 Force calculations required for the simulation

After defining these rules of attraction and repulsion, some mathematical definitions of movement are needed. The accelerations, velocities and positions are written in a way that for every calculation step, the previous value is used and recalculated. This can be done by using first and second order derivatives in basic equations for calculating acceleration, velocity and speed. I do not want to go much in details here, let us rather check what happens after running such program (Figure 2).

The beginning of a Matlab code simulating a predator-prey system

After  every “error message” is fixed, the simulation works….

As the simulation begins, the prey fish swim towards each other and away from the predators in order to form swarms as fast as possible. There is no “eat fish” function in the program – therefore an individual fish or a swarm never disappears once it gets caught, it only escapes. In the moment when a fish enters a swarm, its individual characteristics disappear – a new body (the swarm with an additional fish) is created. Due to a simple starting definition of forces, a non-realistic effect is observed: big swarms simply go “through” a predator without trying to avoid it. A better force calculation (e.g. quadratic or exponential functions) would probably result in fish swarms trying to avoid collisions with predators. Behavior of the predators is in some aspects similar to the one of the prey. In the beginning they try to avoid meeting each other because they have enough choice to chase many other fish. A soon as they meet bigger swarms, they do not care anymore if other predators are close to them. This resembles a natural system where lesser food availability brings competitors together.

What is this useful for?

The simulation described in this article serves for a basic understanding of what is possible in terms of simulation natural systems with computer programmes and in which direction the research is going. There are many different possibilities to apply swarming behavior in technology and unsurprisingly, numerous projects have already shown some progress. Examples are swarm robotics, artificial intelligence, cooperative control mechanisms [1], etc…

All natural systems, not only predator-prey relations, exhibit some kind of intelligence of a superorganism (leafcutter ants, termites, bees, different symbiosis, rainforest, ecosystem,…) [2]. Characteristics of individuals in such systems become less important as the cumulative behavior has beneficial effects. Studying that is not only interesting, it also has a useful potential for technical developments – if only we are able to recognize and fully understand the functioning principles of natural systems.


Simulation of natural systems -Part I