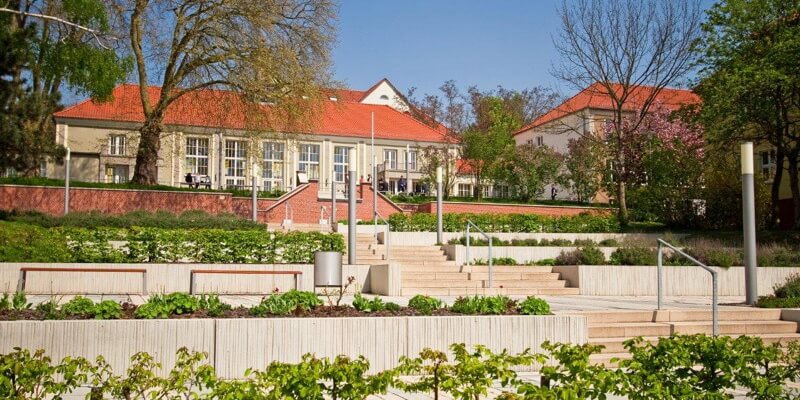 Last week I presented you the International Project Week 2016 (IPW 2016) of the UAS Nordhausen and gave you a general overview about it. This week I will finish with the content of the 3 last days. Furthermore, you’ll read more about the decision making and the tools I used as a lecturer. This includes my goals for the students, that  I wanted to reach and how I tried to guide them through the course.

„Looking for my concept for the week, I decided to change my whole plan for …“ … Wednesday. It took me several hours on Tuesday… Was it a good decision? It seemed so! I switched from folding structures and an additional drawing session to a closing session, which would give them more time to focus on their own project and the final presentations. The closing session was intended as a final lecture with final examples, which would help to understand their own projects better. So the topics on that day were discussions about the „fin ray effect“ as an example for a bottom up approach and the beaver teeth as an example to develop a top down approach. After that I tried to close the lecture with a discussion about the difference of a technological and biological systems, which led to the determination of a definition of life. The bullet points the group collected for a the differences of biological and technological system did include the terms alive and dead, so I tried to lead the students to that problem of life. At this point an open discussion environment was established.

This was the last day of lectures. The groups were preparing themselves, awaiting the last presentation for their own chosen topic. It was awesome what they did over the last few days. Every group had a very good and entertaining presentation and in addition an experiment!

I chose that I just moderate the day, which was planned for the creation of the group’s poster. There were some problems that the group had to overcome.

How would you solve those problems?

The students found a very effective method to solve all problems at once and it wasn’t necessary for me to take any action. Just take a look! 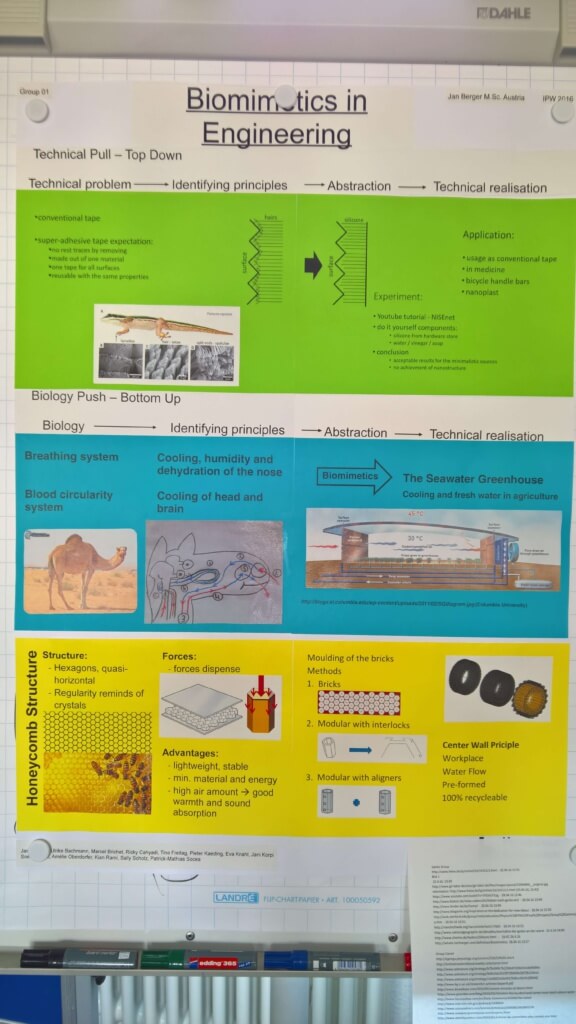 As you can see, they created a structure based on the basic principles of the biomimetic scientific workflow. Using that method they created a standardized principle of structuring to their information order. It was possible that one group itself could just focus on their own project, but the other topics were also visible. If a guest would have a question about other examples on the poster, they could respond because of the same information structure and of course the 5 presentations of the other groups they had heard during the last few days.

I saw the poster the next morning.

Public presentation day! The students had a last chance to go through their presentations and it was very well structured, entertaining and self confident. From side was nothing left to say.

Presentation time! We were in a building with the other engineering courses. The next one and a half hours were the time frame for the presentations. Every project group had to held 4 presentations á 10 minutes and 5-10 minutes discussion with the audience. Andy, one of the IPW staff members who was responsible for technical/organizational problems, got a bell and managed the time schedule. After that 20 minutes the bell would ring and the next group will start with their presentation. The other members of the project course had the time to visit the other groups to learn about their projects. It was a the first time that this kind presentations were held on the IPW and gave the day a nice structure! 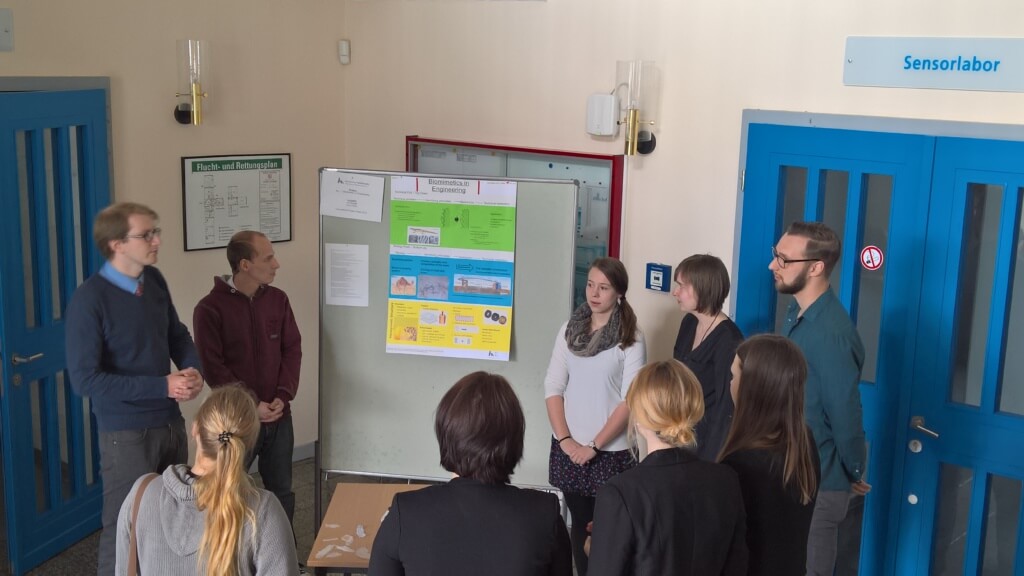 The day was closed by a ceremony, where all students participated. We, the lecturers, had the last time to say something and conclude our experience! It was just awesome, but what would you say in your last 22 seconds 😉

Now that you had the chance to read my report, I’ll like to spend some words on the general concept I was trying to imply.

It was obvious that 4 days of lecturing are a long time, but actually still too short to show all aspects of Biomimetics. So I concentrated on the creation of a creative and open environment, where the students get an idea of Biomimetics. An idea is more useful than just many information and examples.

What I learnt during my studies is that learning is a process of understanding and practicing with all available senses. Just to see and hear is not enough, you need to feel, taste and smell it. Fortunately, in Biomimetics we can use all that senses, because we usually are working with nature. That’s why a part of my lectures were performed outside the lecture hall. The drawing session was just one way to create a direct contact between the students and nature. As all groups started their own experiments without my direct influence showed me, that my concept was probably right.

To reach this, it was also necessary to bring the participants in contact to each other, especially with methods that show that they were there for the same purpose. The same purpose can connect people and helps to work together. My game of choice to bring this into a group of non-professionals is „Good morning, darling!“. In this game they had to talk with their fellow students as they were at home at their kitchen table.

In addition to that open environment, I was thinking about the possibilities of increasing their english skills, which is a big purpose of the IPW. As you could read before, I tried to create an atmosphere where everybody could speak freely and could express own ideas to the others. To support that approach, I set up a daily encounter: the presentations.

Furthermore, I tried to do not a single Biomimetic example with a full explanation, except the first one (lotus effect). Every example that they had the chance to explore by themselves, with me being just a guideline, would help them much more than 10 fully explained examples.

In this small group arrangement only a few rules have to be set up:

As you can see, nothing special, those are just core rules for a good working environment. Maybe you can add „no wrong or right“ but if you want discuss something, someone has to be on the „wrong“ side sometimes – just to get another perspective (Advocatus Diaboli).

In the end I also want to give another big thank you to the whole IPW team, but especially to Thomas, who really encouraged me to participate at this wonderful institution! Also a big „thank you!“ to my fellow lecturers, I learnt a lot from you! I am not very good with being grateful, so here I hesitate with the right words. I just know, I’ll never miss this special experience. I hope we all see us next year!