In Conversation With a Physicist 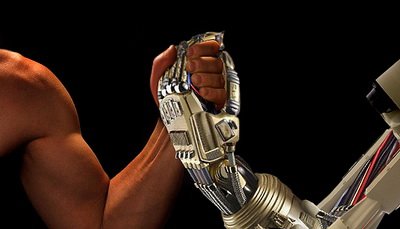 Hope you are having a great summer so far. I want to start with important question; why should we use biomimetics? We have often told you that we should learn from nature and use the solutions offered by nature for problem solving. But some of you might ask, though nature is smart, can it offer solutions to complex technical problems. We have shown you with the help of many examples how this process could look like and where we can find inspiration in nature. Today I want to briefly discuss why we should do that.

The inspiration to this article came to me while having a discussion with one of my fellow passenger who, was on board a flight with me from Venice. She argued that though nature is smart, it might not provide solutions to complex technical problems. Her argument was justified based on the fact that nature does not use modern day equivalents of computer aided design (CAD), materials and manufacturing techniques. Design in nature has not come to be what it is today in a span few years rather it’s the result of a few million years of evolution.

Not all the mechanisms in nature are unique; many designs which did not evolve with the environment have perished. In other words, it is  ‘survival of the strongest’. So nature is smart and has many mechanisms which are the result of millions of years of evolution, but how easy is it to find solutions in nature? Problem solving using nature as an inspiration is not like going shopping to a store; rather it is like getting a suit tailored made to your specifications. The natural principle has to be abstracted and again adapted to the technical problem.

One of the first example I discussed with my fellow passenger was bats. Bats are a very good example of evolution. Most scientists believe that bats have evolved from mammals who could fly or echo locate. Many theories have been speculated based on old bat fossils discovered. They speculate that the evolution took a few million years where their limbs evolved into wings, then gliding and finally the bats who can fly (1). The reason for the evolution is believed to be the need of reaching heights in search of food (bats love insects). Though there is still a lack of evidence to prove this theory, the research and fossil evidence shows the process of evolution and how the bats adapted to the environment. 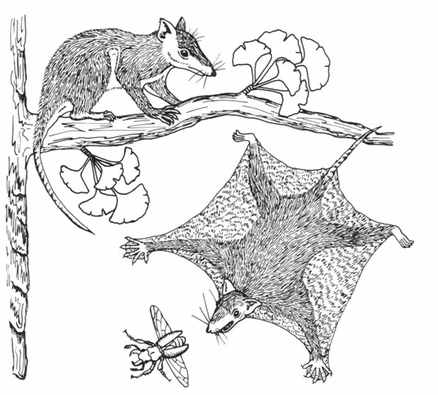 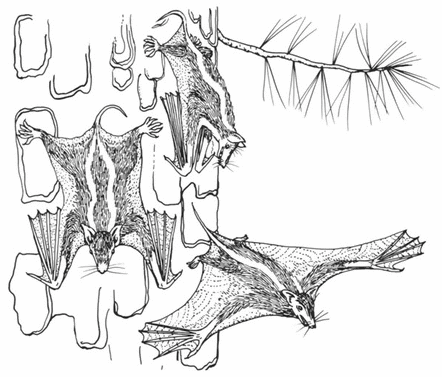 Another example I discussed with my fellow passenger is about scientists trying to solve technical problem in the field of home heating. How does a polar bear survive the arctic cold? That is obvious she said, it has a very thick fur. It is true that polar bears have a very thick fur, but the thickness has got a very small role in keeping the polar bear from freezing. Polar bears depend on the surround light to obtain heat and stay warm in sub-freezing temperatures. Polar bears hair is actually transparent and hollow (2). The hairs are modern day equivalents of fiber optics. When the light falls on a strand of hair, it travels along the length of the hair reflecting from the side to side. As shown in figure 2 (a). 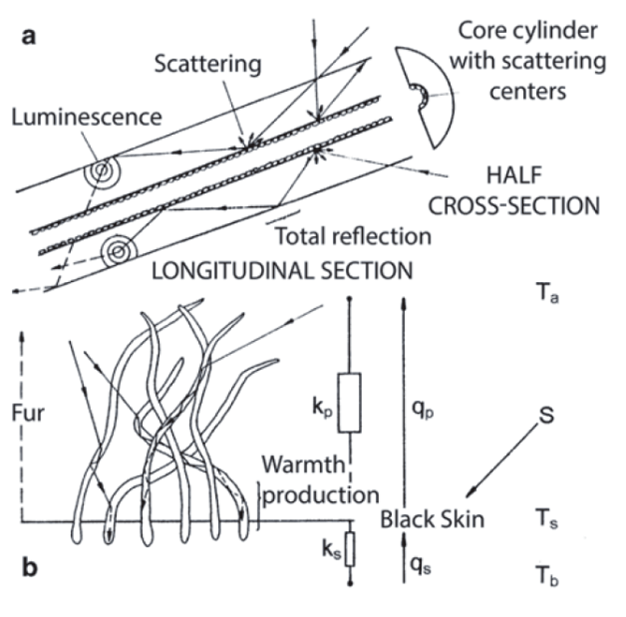 Some of light which escapes the hair is absorbed by other surround hairs. The dense packing of the hairs enables this mechanism. When the light reaches the base of the hair it stays trapped there as the polar bear skin is black on the inside shown in figure 2 (b). The light is absorbed by the black skin hence keeping the polar bear warm. It does not mean that all the homes in cold countries should be covered in hair, but a facade which can perform the same function of trapping the light and keeping it there could do the same.

Further reference I would recommend this book:

A more detailed view of such a system is well described in the following paper from a former biomimetics student.

What has a natural system got to do with computer science, asked my fellow passenger curiously. The behavior of the natural groups such as ants, bees and swarms demonstrates that self-organization and cooperation by following simple rules of interaction can result in a wide range of optimal patterns [5]. For those of you who might not have heard about this, it is an algorithm based on the social behavior of ants. The ants have a unique way of finding the food and bringing it back to the nest using a pheromone trail. These behavior patterns can provide models for solving difficult combinatorial optimization problems (4). The field of ant colony optimization (ACO), is the process of developing algorithms inspired from one of the ant behavior. The possibility to find what computer scientists would call shortest paths, has become the most successful and widely recognized algorithmic technique based on ant behavior (4).

These techniques used by insects, birds and fish, can be applied to many real life situations. Swarming is one such behavior. One simple application which you might all relate to is riding a bicycle with a group of friends. The one in front has the highest resistance from the wind and no one wants to be the one in the front. The same behavior is also seen in both fish and birds who travel in swarms. For further reference I would recommend you to read the following article form my college.

To conclude, my fellow passenger though was not completely convinced, but I am sure I raised her curiosity about the topic itself. Wish you readers a nice day and don’t forget to look around in the nature for inspiration.