I was thrilled to be invited writing about the ice theme, specifically about the polar bears. I have always considered polar bears the epitome of ice warriors (been always fascinated by Pullman’s His Dark Materials’ novels). Millions of years of evolution equipped the polar bear to survive the extremely low winter temperatures  in the arctic (~ – 40°C). The animal relies on a complex set of anatomical and physiological adaptations to maintain a constant body temperature. In addition, the polar bears don’t practice hibernation; except for pregnant females. The polar bear remain active throughout the year by adjusting their metabolic rate depending on the availability of the food.

The animal’s life cycle bounds to the sea ice in order to be able to hunt seals at sea ice openings. Therefore, the rapid declining of arctic sea ice ;due to the global-warming; is negatively affecting the polar bears by increasing the danger of drowning and reducing the access to food.

For the Polar Bear and most of cold-climates animals, the c oat plays a very important role in the survival of the animals.It forms the critically important outermost barrier between the animal and its environment.

An old controversy and new results

The fact that he polar bear fur reflects the ultraviolet light (UV) poorly has encouraged scientists to explain this phenomenon on the basis of a fiber-optical conduction of UV light to the animal’s black skin [1][2]. Later, Tributsch et al. [3] observed that UV and visible light (VIS) transfer within the transparent hair is highly attenuated. The study explained the function of the animal’s fur as a transparent insulation with scattering processes. Later on critics denied it [4], arguing that the light travels for a very short distance within an individual hair. Mistakenly,they were focusing on the optical properties of an individual hair and failing to understand the fur as a whole.

A new study explains this contradiction [4] : The light harvesting mechanism, which is subject to non-imaging optics, can only be understood as a synergetic cooperation of many of the animal`s hairs. Light enters the hair’s fiber via a scattering process for a short distance. Soon after, the light leaves the hair by a subsequent scattering process. The same light enters the neighboring hair and so on until the light is dissipated into heat or absorbed by the bear`s black skin (Figure 2).

The animal’s hairs is made of light transparent keratin, containing no pigments.  It has hollow and structured cores with relatively big scattering centers (Figure 1). This gives the fur the advantage to appear white as a result of the back-scattering of a small percentage of the visible light of all frequencies without suffering the problem of photo-degradation (check out the first video below).

Moreover, the animal’s solar optical technology includes a complementary strategy: the fur traps IR -radiation of body`s heat effectively. Interestingly, the trapping of thermal radiation does not depend on selective molecular-spectroscopic processes, but is rather provided in a wide range of frequencies because of Mie scattering. This kind of scattering is fairly independent of light frequency (check out the second video below).

How can the UV and VIS light be a viable source of warmth when it is nearly absent for half a year?

The light capturing fur, via the applied non-imaging optics mechanism, is highly adapted to harvest abundant scattered light in the arctic region. Nevertheless, this mechanism`s thermal energy gain is moderate and contribute to the overall heating of the animal weakly. therefore, it is considered evolutionarily young and only a part of the animal’s thermo-regulation system.

What about overheating and dangerous hyperthermia during the long arctic summer and predation?

When wet, the fur supports efficient heat conduction in order to cope with the extra heat. With which the animal takes advantage by swimming a lot in order to cool down in summer. In winter, swimming can also help to warm up when the ice-free water is warmer than the temperatures  of  land or wind chill [4].

What are the advantages of having such a light-scattering based optically active fur for the polar bear?

Inhabiting the arctic,the polar bear has been confronted with the challenge of looking white for camouflage in spite of the high transparency of the keratin. Hence, the animal`s energy harvesting mechanism is a compromise between its need to maintain a white appearance and the advantage of translucent insulation. If nature actually would have allowed the travel of the light for longer distance within individual hairs to reach the black skin by limiting the scattering possibilities (lowering attenuation), the black skin would have  shimmered through the fur.

What are the advantages of having such a light-scattering based optically active fur for our energy industry?

Remarkably, the polar bear’s light harvesting techniques, for our industry, is until now an unknown technical idea. The strategy to base a solar energy system on Mie scattering has many advantages. Firstly, the system would harvest the solar light in a quite simple way and with only one structured material for the entire solar spectrum. Secondly, the same strategy can also cope with thermal energy loss via IR (infrared) radiation. Finally, photochemistry is essentially avoided.

It is also worth pointing out that in contrast to the conventional thermal heat collectors, the animal is almost entirely invisible in infrared vision. The reason behind is the complete retaining of the thermal radiation within the fur.

The Polar Bear’s light harvesting mechanism should motivate researchers to learn more about this solar energy system and develop technical prototypes; i.e. design artificially plastic fibers. Preferably, the hair would be made of artificial keratin fibers; already being used for artificial hair; with scattering centers similar to those in polar bear hairs. The technical challenge therefore is essentially focused on tailoring artificial prototypes of polar bear hair using appropriate radiation stable plastic material. A fur-like mats would cover the facades of buildings with a structure similar to the structure of the polar bear, serving for both as a solar energy collectors and thermal insulators (Figure 3).

The designed system should function independently of the incidence angle of the solar radiation, utilizing direct and diffused radiation; mimicking the functionality of the polar bear’s fur. 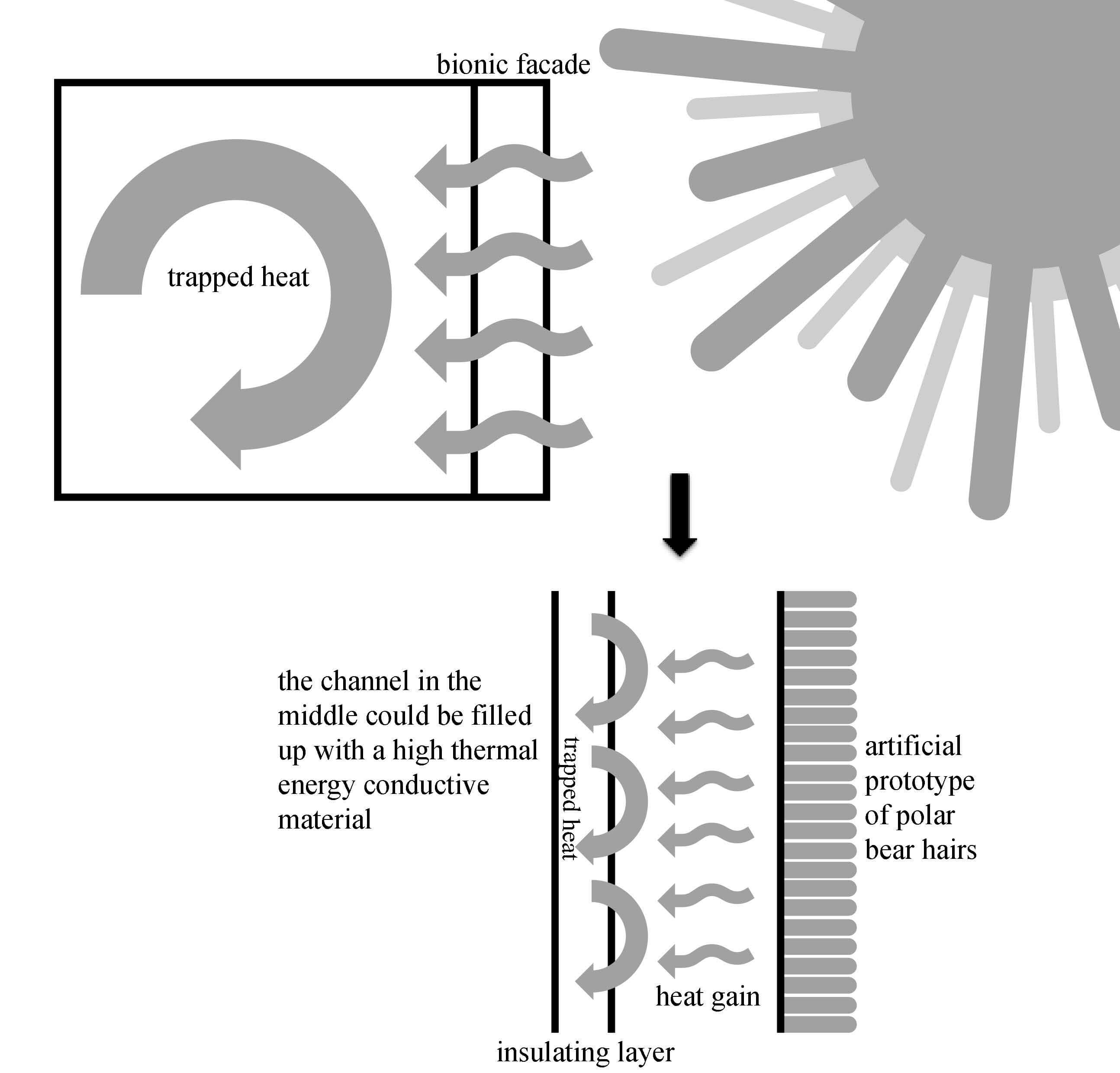 The polar bear’s optical technology is a fiber-optical one, which however, would not work with individual hairs. The hairs of the transparent pelt have to engage collectively in scattering processes to produce its extraordinary properties.

For further inquires regard this topic, please don’t hesitate to contact me (mohammed.KHATTAB@alumni.fh-kaernten.at).


Ice, desert, beetle and their connection 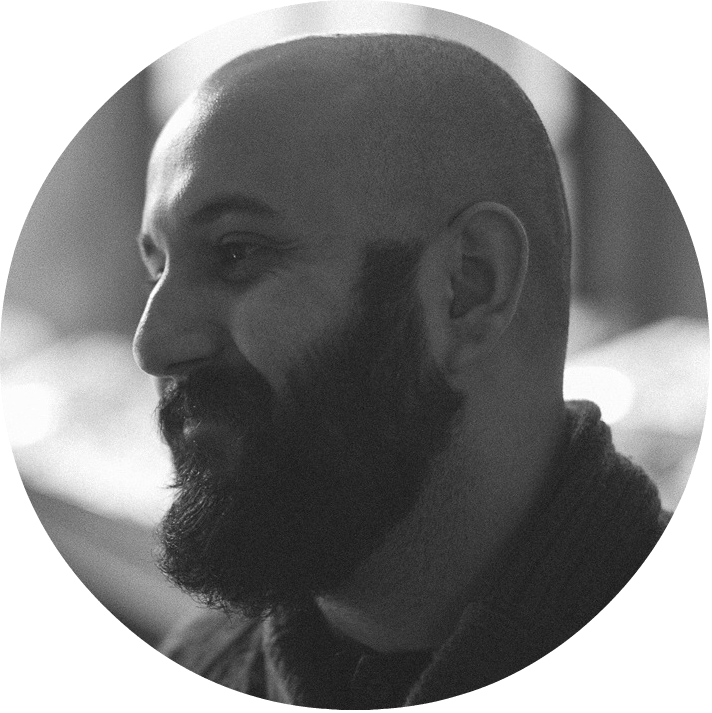 My name is Mohammed khattab, born and raised in Baghdad/Iraq, finished my bachelor study in Damascus/Syria in Computer and Communication Engineering. Nature has never failed to fascinate and bewilder me, effecting my decision eventually to attended a Biomimeitcs programme in Villach/Austria, and conducting my thesis research as part of the Polar Bear House project in Denkendorf/Germany, developing and optimizing a biomimetic textile for heat insulation and solar energy harvesting developed by the ITV Denkendorf and inspired by the Polar Bear fur. Later on, I continued my research independently from my flat in Klagenfurt/Austria, in cooperation with Prof. Tributsch, focusing on the biological adaptations of the animal´s fur, where in 2016 the research findings were published. My interest in Engineering and Technology filed as a bachelor student and my decision to continue my education in Biomimetics field is the outcome of my passionate interest in studying nature ingenuity´s design for technical purposes, with a commitment to researching and developing innovate bio-inspired energy-efficient solutions and technologies for various technical problems. Having extensive working experience with Social/Humanitarian domain and being a refugee myself, drove me to start working as a social worker since March this year in an agency belongs to the city of Vienna; providing counseling for persons entitled to asylum. My ultimate goal would be to find the right formula of nourishing and pursuing both interests (technical and social), hopefully.