Biomimetics Inspires Functional Surfaces which are Efficient and Sustainable

Over the last few decades, knowledge transfer from biological concepts to generate technical applications has been receiving increasing attention, often inspiring sustainable biomimetic products in the process. In the past weeks, we have discussed about multiple functional surfaces and how they can be implemented into technical applications. For the theme of surfaces, I will discuss how biomimetic principles can be implemented in order to make the existing products more sustainable. The inspiration for this article came to me when one of my colleagues argued that ‘though there is a rise in biomimetic products, there is a more immediate need for making the existing products more sustainable and efficient’.

Nature has ample number of examples where the surfaces of natural organisms resist erosion from solid particles, reduce drag and facilitate adhesion/repellence of external particles. Erosion of materials by solid particles is a common failure mode in a wide variety of industries. Scientists have been developing high-strength alloys, composites, and surface coatings to combat erosion. Nature on the other hand has had millions of years of evolution to solve the erosion problem, once such example is a desert scorpion.

While most of the animals in the deserts protect themselves from sand-laden wind, Androctonus australis, a north African desert scorpion toughs it out on the surface (2). To give a perspective on how harsh desert climate can be, imagine this: the inhabitants of the desert (plants and animals) are bombarded with abrasive sand particles at velocities more than 100 Km/h. Despite the sand storms in which high speed sand would strip away paint from steel, the desert scorpion is able to scurry off without apparent damage (1). So how does it happen that desert plants and animals can resist conditions which our advanced engineering materials cannot?

Figure 2: (Left) Point clouds of scorpion back. Figure 3: (Right) A) Swirling air caught in the grooves create air cushions and slow down the velocity of the wind. Airborne particles then either B) bounce away without impact or C) hit the surface at a much slower velocity and less impact. D) A particle hitting a flat surface where the wind does not diminish in velocity will have a much higher impact.

According to researchers, desert scorpions resist erosion with the help of the design of their bodies. A team of researchers at Jilin University China, used 3D laser scanning technique, to develop a cloud point representation of the scorpions back shown in figure 2. The analysis showed that the surface’s convex and grooved design facilitates erosion resistance. The groves cause the air striking the scorpions surface to rotate, in particular this rotating wind results in a low-speed reverse flow zone (1). In simple words, the air flow zone on the scorpions body acts like an air cushion, which facilitates some particles (sand) to be harmlessly blown away rather than hitting the surface. The particles that manage to get past this air barrier strike the surface with a considerably lower velocity and impact angle. Though this might not eliminate the problem but it significantly lowers the rate of erosion.

This concept of micro-texture (grooves) on the surface could give way for many applications like turbine blades, air craft engines, solar panels etc where erosion causes failure. In particular such an application in solar cells could open new doors, the fact that we could use solar panels even in harsh climates like deserts where the sunlight is in abundance.

When we speak of drag resistance, aquatic animals have developed multiple strategies to overcome this problem. The skin of fast-swimming sharks exhibits scaled structures aligned in the direction of flow, this to reduce friction drag on the skin. Sharks are covered in numerous small dermal tooth like elements called scales or denticles, these elements help the sharks reduce drag by 5 to 10 % while swimming (4). 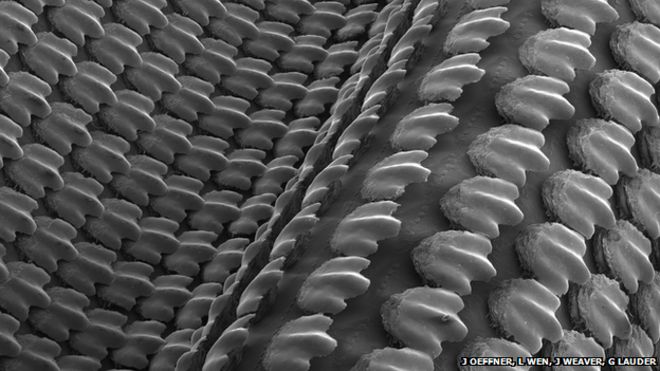 Figure 4: Scientists have used a 3D-printed model of shark skin to show how tooth-like scales help the predators to cruise efficiently. The printed replica included tough „denticles“ embedded in a smooth, flexible membrane

But for the sake of the article I will discuss the state of the art solutions inspired by shark skin. Scientists at Fraunhofer Institute for Manufacturing Engineering and Applied Materials Research (IFAM) in Bremen developed not only a paint that reduces aerodynamic drag, but also the associated manufacturing technology (5). The paint alongside being long lasting can withstand mechanical loads, UV radiation and fluctuations in temperature (5). The paint is applied using a stencil that forms the 3D ridges on the painted surface; the paint is hardened by treating it with UV light. Once the stencil is removed, a shark skin like texture is formed all over the painted surface and the paint does not require any extra layers, thus adding no additional weight. The developer claim that application of this paint to airplanes and ships could result in a saving of thousands of tons of fuel per year (6).

To conclude, surfaces in nature show us the way to engineering functional surfaces which are both sustainable and efficient. More importantly, such mechanisms are already being used not only for new products but, to make the existing one more sustainable.


Why is it itchy? A second skin, wool and other fabrics

„Frictionless“ and anti-abrasive skin of a sandfish