As already mentioned in our introduction article about energy storage, the topic of this article will be elastic energy storage. There are many examples of how different animal species use this kind of energy for running, walking or hopping (kangaroos, flees, click beetles, etc.) by using tendons. For them, elastic mechanisms  have a great influence on their dynamics. When a force is applied to a spring, it bends and stores energy and when it recoils after the force has been released, this energy is released again. In some cases, elastically stored energy results in such a way that jumping is even more efficient than running or walking. But I think these examples are pretty well known, therefore I want to focus on other living organisms which cannot exactly move around, but they can still be quite successful in inhabiting large areas. I am talking about plants and their seed dispersal strategies.

What to do, if you are a plant, bound to the floor but you want your seeds to spread as far as possible to gain enough free space. There are different options – produce tasty colourful fruits that are attractive for animals, which eat them, digest and excrete the seeds at a different place. Or develop some kind of a flying structure, resembling wings, so that the light-weight seeds can float away with the wind. Or maybe create some hooks or sticky surface so that the seeds stick on a passing animal and travel further. What about using some physical laws of energy transfer where seeds are actually being dislocated due to a released kinetic energy? This practically means that a plant should “think” of a structure that gets tensed during the growth phase and at some point this stored elastic energy can be transformed into kinetic energy to spread the seeds through acceleration.

There is a nice scientific term for this mechanism – explosive dehiscence. It is a ballistic form of seed dispersal that dislocates the seeds far away from the parent plant [1]. The absolute winner in this category is a sandbox tree (Hura crepitans) which can fling seeds up to 100 meters away without the assistance of animals. It is also called a “Dynamite tree” due to the loud sound of its explosive dehiscence. Another example is Impatiens (Impatiens glandulifera), whose explosion of seeds is triggered by being touched – therefore it is also called “touch-me-not” (Figure 1).

Explosive dehiscence is a common seed dispersal strategy in plants, where the mechanism is analogous to the catapult: stored elastic energy is rapidly converted into kinetic energy of the seeds. But there is not exact analogue in the plant kingdom of triggering the energy release as in the catapult. 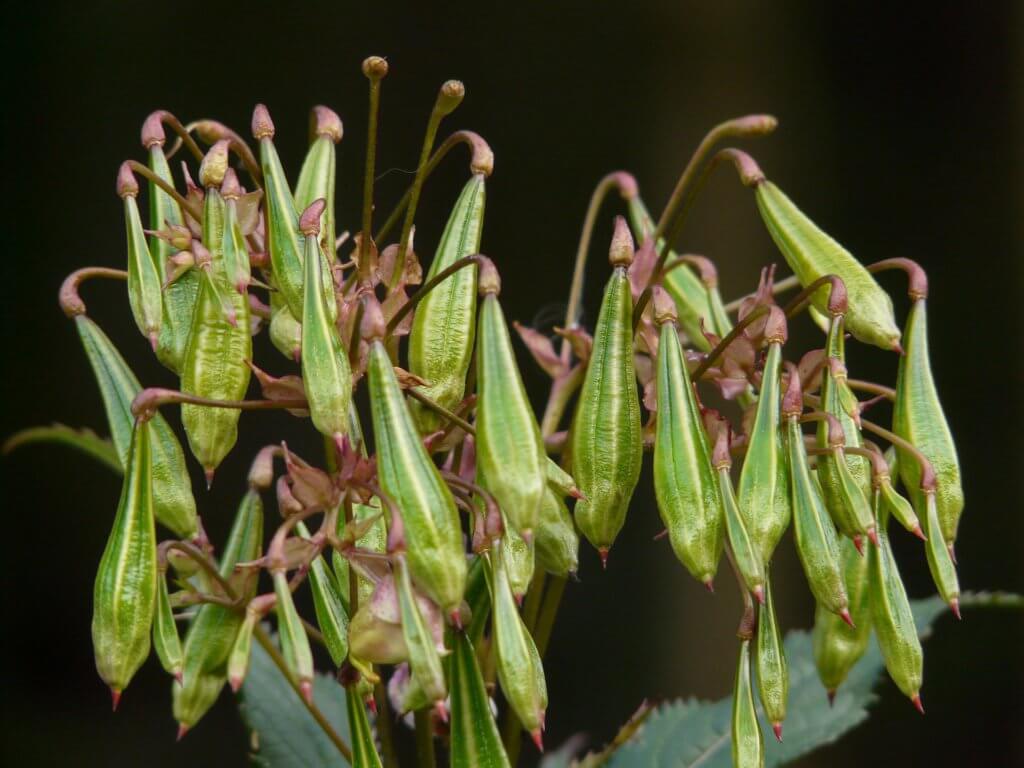 In Biomimetics it is a habit to find a “champion” of the topic under investigation and then scientifically research it to obtain best results. I chose the Impatiens glandulifera as my champion because it is very efficient in exploiting elastic energy storage, resulting to be an invasive species.

The seedpod of Impatiens consists of 5 to 10 seeds inside a shell comprised of five elongated segments or valves [2]. During the plant’s growth, tension is formed in the seedpod since these segments are connected to each other by a membrane in a straightened position. Seed ejection occurs when a crack appears between the segments and quickly propagates along their side in order to bring the valves in a relaxed, curly state. During the ejection sequence, the mechanical energy stored in the valves in the form of elastic potential energy (Ue)is released. Some of this energy is used for crack propagation (fracture energy Uf), some is transferred into the kinetic energy of the seeds (Ks) and valves (Kv), and the rest is lost due to dissipation (D).

Scientist have calculated that the speed of ejected seeds can reach 4 m/s, travelling the distance up to 7 meters [3]. Given the fact that the mass of a seed equals 0.1 mg, a calculated energy gives a value of 0.4 mJ [2]. According to the cited article, this means that almost all the stored energy is converted into kinetic energy and the fracture energy must be very small. How can this be true, if the membrane between all the valves has to rapture all along its length but has to be strong enough to keep the seedpod closed until the time of explosion?

Geometry is the answer

The answer seems to be in the geometry of the valve. The entire length of the valve is tampered in thickness, meaning that the thickness is reduced towards both ends. Because the valves are having a common starting point the thickness variation forces them against the neighbor in order to reach energetically stable position. If one valve would curl to its relaxed state, an energetically costlier curvature would be formed. The structure is optimized in such a way that the negative and positive curvatures are balances just enough to resist the cracking [2]. This state of being precracked and just needing a trigger for explosion saves a lot of energy. Those plants that need to invest more energy into fracturing of the seedpods have much less efficient transfer of elastic to kinetic energy. More efficient energy transfer equals more invasive species.

For an efficient use of the stored energy all valves must be free from each other, which can only be possible if all seams are cracked simultaneously. It takes 250 μs for all the seams to open and 3 ms in total for the pod to fully relax and accelerate the seeds [2]. Such synchronization is in 80% achieved by an external mechanical trigger. The cascade begins when one of the seams reaches a threshold of crack growth – it starts to open and triggers the remaining ones to fracture. The seeds are literally exploded into the air, faster that a naked eye could see any of these details. The following video shows some nice seed pod explosions in slow motion.

It is indeed impressive the construction of the seed pod. For some researchers is a marvel of natural design that achieves a highly efficient energy transfer by exploiting the rapidity of fracture, finessing the fracture energy cost, and coordinating the simultaneous fracture of its seams. Do you see any potential of this mechanism to improve our technology?