Pollen filtration from water inspired by a flamingo

I didn’t actually know what Biomimetics is before I started my master studies and as usually, the first week at the faculty is always related to some theoretical facts. I learned that Biomimetics is a useful method to develop new products, new technology, etc., based on principal ideas from natural phenomena. And then baaam, immediately we had to propose a topic for our Bionic design project course. This was a lecture where we had to investigate a natural phenomena, abstract the main principles and come up with an application. We had one week time and honestly, I couldn’t sleep because of the stress to bring up an idea (which shouldn’t be stupid if possible). I am not that kind of a person that has a brainstorm of ideas when someone asks me so.

Since Biomimetics has two different approaches, I chose one where existing technical problems need a solution, the so-called top-down approach. The other one is bottom-up approach where one starts researching a biological system and then tries to figure out what could that be useful for. At home we collect rainwater and pump it back to the house for the washing machine and for flushing toilets. Before it enters the house, we filter it on a 90 μm mesh to remove the dirt. But every year there’s a problem with pollen. When these microscopic particles reach water, they form bigger agglomerates on the surfaces, form thin film on the reservoir walls and start to decompose. The water is therefore yellowish and starts to smell. My idea then was to find a filtering system in nature which is effective to filter particles smaller than 0.1 mm, is fast and autonomous.

There are many filter-feeders in nature. They differ in size (from krill to whale), in mechanism of filtration and in size of filtered particles (unicellular – small fish). Animals whose feeding mechanisms are studied are baleen whales, flamingos, bivalves, sea sponges and fiches. Among them, flamingos represent the champions (the best representatives among the category of filterers) because their filtering mechanism and the size of filtered particles suit most to solve that particular mechanical problem (must see this video). The size of pollen ranges from 0.006 mm to 0.1 mm [Zweers et al.] but it forms larger aggregations in water.

Why flamingos are chosen as champions? Other filter-feeders might be better filtrators from the filtrated particle size point of view or the rate of filtration but their swallowing or digestion mechanism is very slow or complicated considering the existing technical problem. Bivalves direct the water flow over their gills by the beating of cilia. Suspended food is trapped in the mucus from where it is transported to the mouth where digestion starts. Filtration rates could be enormous (e.g. each oyster filters up to 55 litres of water per day) [Jorgensen, 1996] but particles trapped in the mucus can only be removed by slow digestion process. Among fishes, certain sharks such as white shark can filter anything above 2 to 3 mm in diameter [1] but to remove the trapped food they use a technique of coughing. Sea sponges maintain continuous in and out water flow through a system of channels and chambers by the movement of flagella of choanocytes. Intercellular digestion occurs in choanocytes and thesocytes which is again a slow process occurring in a very porous material. Baleen whales filter huge amounts of food through the baleen where food (ranging from krill to small fishes) is trapped and then swallow it with their huge tongue.

Flamingos use a similar system where water with suspended particles is compressed through a lamellate structure which can adapt to form a mesh of different dimensions and therefore select size of food particles. They are capable of selecting and filtering particles from 1.0 to 4.0 mm [2] by manipulating the size and duration of a gap. Another advantage of their fast feeding is that filtering and swallowing occur at the same time by the same organs. The tongue is drawn back into the pharynx, creating a negative pressure in the mouth, thus allowing food and water to enter. The beak is then closed and the tongue is moved forward. Food is trapped in the mouth while water is expressed through the lamellae. These are comb-like structures covered with fine hairs inside of the beak. These hairs are raised and lowered during the feeding cycle which takes about four seconds. The cycle is completed by guiding the trapped food down the expohagus by backward facing spines on the tongue. 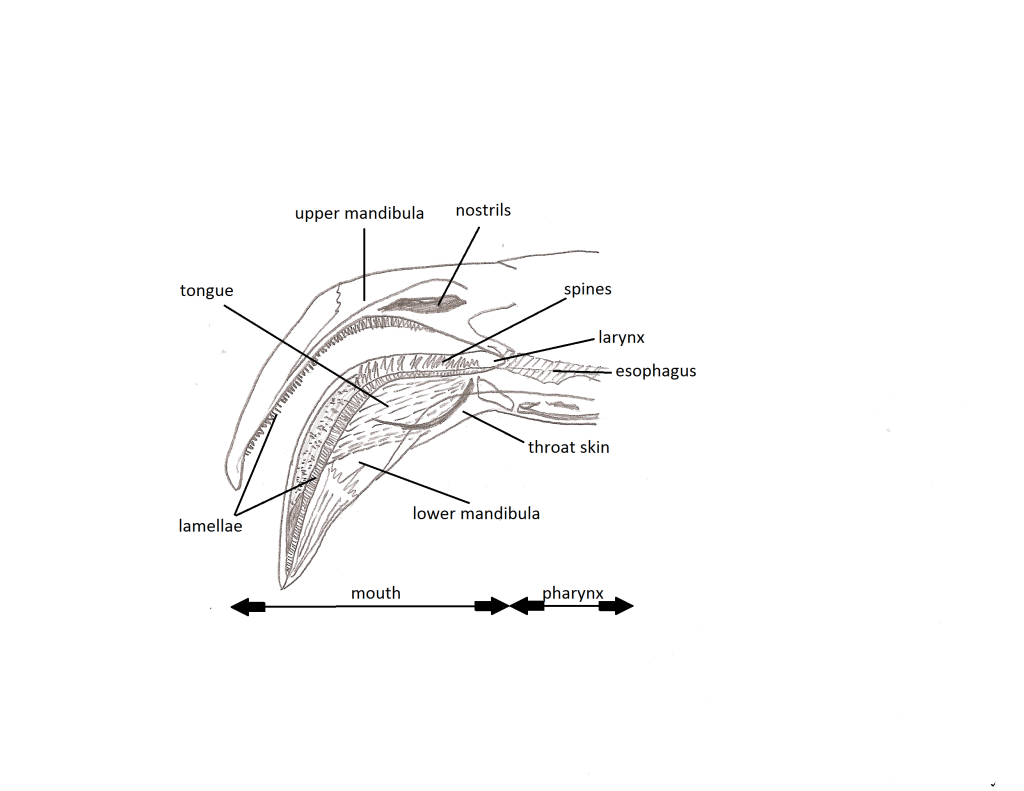 Next step then is the abstraction of principles and their application. Principal parts of flamingos’ filtration mechanism are used to design a filtering device (Figure 2).

I’ve decided to keep the final design of that filtering device for myself. Maybe one day I decide to develop and construct it 🙂 .  It was just an attempt to realize a top-down approach of a biomimetic design and maybe it turns out as a useful application.


My personal experience with biomimetics (Kathi)… or: how I ended up here!

Inspiration; or the dedication for new ideas