Renewable energies – it is a hot topic since the last 10 years. Many developed countries around the world are tending to shift their energy production to a “green” one due to the global warming problem and energetic self-sufficiency. Among all possible renewable energy technologies, photovoltaic industry is growing very fast. Its main material is silicon dioxide (SiO2), an inorganic semiconductor which is abundant in the Earth’s crust. But the skyrocketing demand for this material is causing its price to rise. Also its processing is demanding high energy costs so it is not really sustainable. Maybe you have already heard about the next step in solar cell development which is actually based on a natural principle that is surrounding us in every day’s life – it is photosynthesis. The attempt to use photosynthesis technically (= mimicing basic electro-chemical processes) started quite some time ago, in the 70’s [1], and this type of alternative technology is called dye-sensitized solar cells (DSSC).

Photosensitization is an electrochemical process occurring during photosynthesis in green plants. There exist two different reaction centers – photosystem I and photosystem II, which are found in thylakoid membranes of chloroplasts (cell organelles). The photons of visible light are absorbed there and cause specific protein complexes along a chain to get excited. This photon energy promotes an electron in pigment chlorophyll to a higher molecular energy level, simultaneously with splitting a water molecule to a proton (H+) and oxygen (O2). Such an electron transfer along the chain of proteins is an electrical current that runs the important pump (ATP-synthase) inside the plant cells to produce energy in the form of adenosine three-phosphate (ATP). A simplified explanation is shown in this video

From biochemistry to electricity…

Since man made technology, inspired by nature, cannot be made out of the same materials, substitutes must be found (in terms of used materials, chemicals, etc.). Also the design itself is adopted to technical limitations. Based on the process of photosynthesis, DSSC have been designed as shown in Figure 1. Light is absorbed by the dye on the surface of TiO2 crystals and this is exactly where charge separation takes place. A photoinduced electron is injected from the excited dye into the conduction band of TiO2. As a negatively charged electron flows out through an external circuit, a positively charged hole is left at the dye. The regeneration of a dye happens by a redox reaction in the electrolyte. The electrolyte gets back its electron at the outer counter electrode when the electron comes back through the circuit. 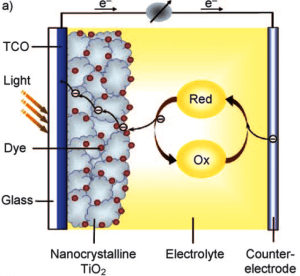 Figure 1: Scheme of a DSSC with a marked electron flow [2]

How efficient are the systems?

After the simplified description of both processes, one should recognize the links between the natural and technical system. But, like engineers like to ask, what is the efficiency of such systems? The first difference is related to the absorbed light: DSSC without dyes could only absorb UV-light (TiO2 has a large band gap 3.0-3.2 eV). Adsorbed dyes on a nano-sized semiconductor push this light spectrum to visible light wavelengths and therefore DSSC can reach 6-11% power conversion in best case [2]. In photosynthesis, the theoretical maximum efficiency of solar energy conversion is approximately 11% but in reality it is only 3-6 % of total solar radiation [3]. Plants do not absorb all incoming sunlight (due to reflection as one reason) and do not convert all harvested energy into biomass. Only 0.1 % of absorbed light is converted into biomass [4]!

Beside the advantages that DSSC have shown, there is still much to be improved in order to reach and exceed the efficiency of silicon solar cells. Potential is in stability problems of a liquid electrolyte, lack of organic dyes capable of covering the electromagnetic spectrum and the price related choice of materials. Maybe super efficient solar cells are not even necessary, we can always do it like nature does: sustainably produced functional cells with low efficiency, but exposed to as large surface as possible (walls, roofs,…).


„Go with the flow“ – learning from natural material flows

Merry Christmas from the BlogIONIK team …