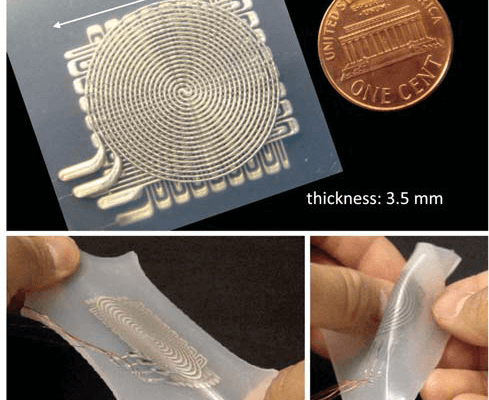 In my last articles I set the focus on the field of sensors in Biomimetics. Today I’d like to write about skin and its technological future.

The skin is the main instance for a lot of creatures to create a border between them and their environment. However, a skin is not just about the definition of their own body against the different sources of danger from their surrounding. Very important is the preservation of information just from this area.Sound waves takes on the ear.The chemical composition of the environment can be detected by mouth and nose. The skin as a boundary of the body also has special perceptual sensors. Thus, the skin with its many receptors takes over tasks that are at least as important as seeing or hearing.

My personal favorite is the skin’s ability to process light. The eyes can absorb „visible“ light and not more, our skin, however, can detect heat via radiation and also by conduction. The ability to sense the temperature of the environment should not be overestimated. In accordance with it, the sense of touch in combination with temperature perception, makes it possible to evaluate objects on consistency and condition. It makes a big difference if you feel a warm, liquid water or even cold, hard ice. Just this example can describe perceived sensations very well. Consider the response to cold ice in the hand and have warm water running down from the hand to the arm.

Once you take the time for test yourself how your own body reacts to certain stimuli, you will notice that certain regions on the body have a greater perception accuracy than others. These specific regions are actually in accordance with the interaction skills that a human being has. From my own experience I can say that the hands are well equipped with the highest perception resolution, this makes it possible to contact an object very clearly with defined position expectations. If you touch the skin of your fingers with a needle, you know the exact position even without watching. But, more importantly, it is still possible to detect small differences in the position of the needle in relation to another position.It is this ability of a relative position of perception that makes the hands so incredibly important to work with the environment…

If you were to perform the same experiment, for example, on the back, you would of course immediately feel the needle touches the back and you also know at what position. However, you could barely distinguish between 2 contact points at a distance of several millimeters. This leads to the realization that sensitivity has only indirectly to do with the resolution of touch. At least it seems that the resolution is at its greatest, where the most frequent interactions with the environment are performed.

After a lengthy introduction today, based on own experiences, I would like to continue and transfer the phenomenon of the skin in the area of technology. In recent years, there are many projects that have specialized in the research of artificial skin. Starting with artificial skin for patients of surgery to very interesting ideas within robotics.

As always, I will give a small overview about the topic.

„Skin, composed of two layers called epidermis (the outer layer) and dermis (the inner layer), is the largest human organ. It covers the entire body, keeping harmful bacteria out and vital fluids in. The epidermis is the outer layer; the dermis is the inner layer that contains the blood vessels, nerves, and hair, oil, and sweat glands. A severe burn leaves the body dangerously vulnerable to infection and dehydration (drying out). Keeping burn patients in sterile (germ free) rooms can protect against infection, and covering burned areas with grafts (a piece of skin or bone transplanted from one area of the body to another) from the patient’s own skin or temporary grafts from other humans or pigs can help save some patients. Still, many burn patients die because their bodies cannot produce large quantities of new skin quickly enough, or because their bodies reject the skin grafts.“ [1]

John F. Burke and Ioannis V. Yannas are the inventors of the first synthetic skin. It was a co-work between the MIT (Massachusetts Institute of Technology) and Massachusetts General Hospital. They used the skin as a treatment for burn victims because Burke realized the need for human skin replacement. In the 1970s the two used a polymer consisting collagen (a human protein) fibers and long sugar molecule to create a porous material, which resembles skin. Placed on open wounds the material encouraged the growth of new cells around it. About 10 years and some development steps later Burke and Yannas used their synthetic skin on their first patient… with success! [1]

Another kind of synthetic skin was developed during the cooperation of Howard Green (Harvard University) and Eugene Bell (MIT) inside the Organogenesis project. The goal was to make an artificial skin that consists of an epidermis layer and has the ability to resist the patient rejection by the immune system.

Graftskin is a living skin equivalent made of purified bovine collagen into which some cells of the patient are placed for growth (a technique that is mostly used today is in so called „tissue engineering“, which evolved out of these projects.) Cultured human skin cells are on top of the epidermis layer. In clinical trials Graftskins have not been rejected by patient’s immune systems.[1]

You think an artificial replacement for our natural skin is a complex task? Wait till you read more about electronic skins, which are made not only for robots but also for prosthetics. This skins should really feel but are based on flexible (electronic) circuits made of printed alloys or carbon nanotubes. I’ll give you a small overview…

Here I start with a video that explains the technology, which will be possibly used to give artificial limbs the sense of touch. It will connect with the information from the article: „Restoring the sense of touch“ (- MIT: Polina Anikeeva, Ryan A. Koppes), which was discussed in Science magazine, too. The video was done by the Bao Research Group of Stanford University (the same group which developed a feeling and self healing artificial skin in 2012)

Another special field for this kind of electronic skins are embedded microchannels and liquid conductors. In August 2012 an article was published by Yong-Lae Park, Bor-Rong Chen and Robert J. Woods. They described the design, fabrication and calibration of such artificial skin sensors. In general the sensor consists of diverse layers of microchannels, filled with conductive liquids, which led to very flexible electronic components![3] 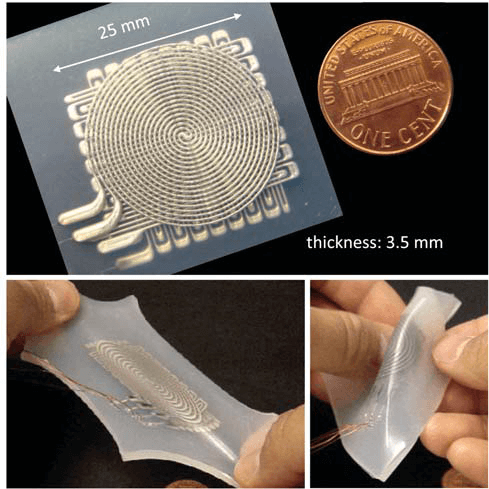 Artificial Skin as a sensor for inside body applications

Here is another option for the usage of flexible electronics. Maybe it is a bit too far away from Biomimetics at all, but at least it is very interesting.

The researchers created a patch for the skin, that monitors muscle movement and stores the data.

That should be enough for today. Maybe my next article will catch up the topic again and I show some other directions in the artificial organs field (maybe tissue engineering!?).


Temperature regulation by plants and animals

‚Temperature regulation in plants and animals‘– An Engineers Point of view