It is not so common to mention plants in relation to electrostatic fields. Nevertheless, there are some interesting facts about this topic and you might be surprised how many natural processes are hidden behind the phenomenon of electrostatics.

During fair weather conditions (meaning a relatively clear sky with calm winds), a vertical electric field averaging around 100 V/m is present in nature. In such cases the atmosphere has a slight preponderance of positive ions, giving the air a small net positive charge. Collectively, the surface of the Earth and the plants and animals in electrical contact with it carry a net negative charge (the reason is polarization effect). It is qual to the cumulative atmospheric charge, even though the ground is defined to have an electrical potential of zero volts.

Whenever a charged body (or a charged cloud) approaches the plant, a charge transfer tends to occur throughout the plants. This charge-transfer characteristic is possible due to a plant-polarization effect [1]. Briefly explained, the electrical field theory indicates that an electrostatic charge is asymmetrically distributed on small radius of curvature (Figure 1). For plants this would mean a charge concentration (sometimes more than 100 kV/m) on pointed plant parts (e.g. tips of branches, edges of leaves and feathery plant stigmas) that extend above their surroundings [1, 2]. Under unstable weather conditions (cloudy or rainy day), the atmospheric electric fields can change their polarity and the surface charge on Earth then becomes positive [2]. Because plants are conductive (~ 20 kΩ), charge can move through them and distribute according to the plant geometry so that every point has the same ground potential [2]. The transient charge transfer capability of living plants has been experimentally verified and proven in naturally occurring pollination [2, 3]. 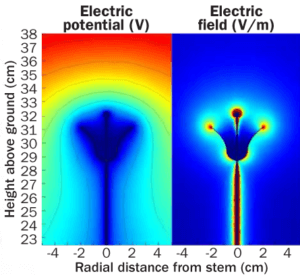 Figure 1: Electrostatic field around a plant and charge distribution [5]

The magnitude of an electric field of plants depends in part on the chemical composition of the plant, its height and the environment. The distribution of the electric field varies with plant’s shape and should be greatest near sharp points. Foraging bees usually possess electrically positive surface charges, caused by flying through the air and being confronted with electrical currents (“frictional electricity”). When pollen-seeking insects land on plants (Figure 2), the forces of attraction will enhance negatively charged pollen to stick to insect’s positively charged body [4]. The figure explains that electrostatic induction causes the induction of temporary forces of attraction (F) between the charged bodies. These forces depend on the magnitude of the charged (q1 and q2) and on the distance between the charged bodies (r).

Figure 2: A scheme of electrostatic induction [4]

The principle is as following. As an insect carrying an electrical charge approaches a flower, charge of opposite polarity flows into the stem and flowers and induces an electric field between the insect and the flower. This electric field grows in strength as the gap between them narrows. The forces of attraction temporarily created between the airborne insect and the flower initiate the detachment of pollen grains from the anther and their deposition on the insect’s body [4].

In their study, Bowker and Crenshaw (2007) showed that most pollen grains carry a measurable electrostatic charge. Collectively, for all studies species, positively and negatively charged pollen grains were present (charge bipolar distribution, roughly centred about zero). Figure 3 shows frequency distributions of pollen grains as a function of pollen charge (fC = femto coulomb = 10-15 C). The bipolar nature of charge distribution influences the dispersal and capture of pollen. Positively charged pollen tends to be attracted to plants, particularly the feathery stigmas with their correspondingly large surrounding electric fields [2]. 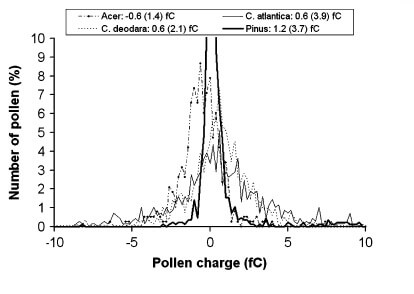 Accordingly to my last article on water condensation, I would like to know, if electrostatic charging can also be used for water condensation on plants. In the atmosphere this is a normal case since the rain droplets are formed around charged particles. If plants would be able to build up a charge big enough to condensate water molecules from air, this could serve as a great biomimetic model for water condensation. More about my research on this topic will be described in my next article.


Part 2: Where to study Biomimetics in Europe?

How to use: Gecko Feet and its Applications