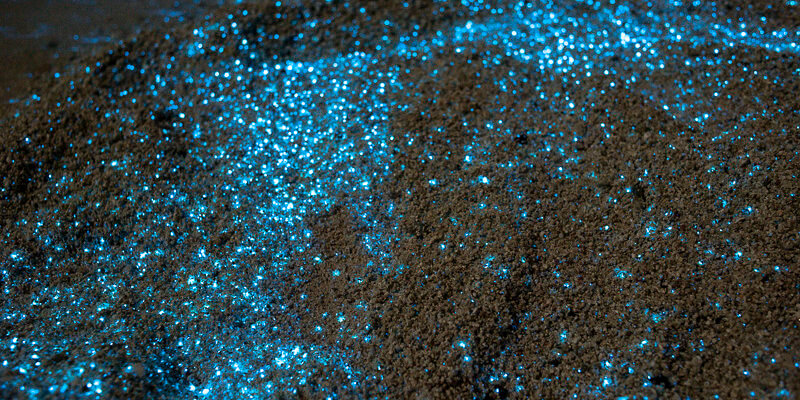 The creation of light is for sure one of the most interesting natural phenomena, especially if it occurs by living organisms. Bioluminescence means the emission of light by an organism as a result of a natural chemical reaction [1]. A remarkable variety of marine animals, underground organisms and terrestrial animals are able to produce light by themselves. Fireflies, earth worms, different species of snails, fungus and fish are only few examples.

Apart from fireflies, dinoflagellates are the most commonly observed bioluminescent organisms. This marine plankton (Figure 1) causes an appearance of sparkling light in the bays of tropical waters. Even though dinoflagellates are single-celled organisms, some of them are large enough to be seen with the naked eye. 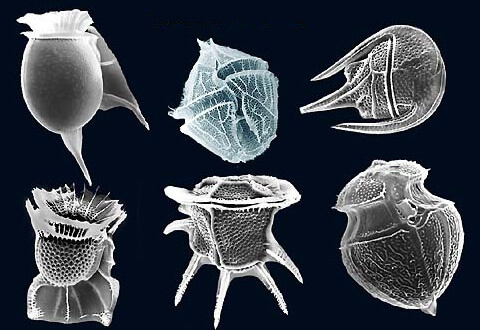 Bioluminescence is an ability of dinoflagellates – microscopic plankton

How do they glow?

Maybe you already were lucky enough to walk along the coast in a shallow water where dinoflagellates occur in high density. With every step that mechanically disturbs them, they start glowing (=physical excitation). This process is closely controlled by chemical and neurological mechanisms through which animals can turn their photophores (light-emitting organs) on and off. Simply explained, a cascade of chemical substances triggers the main protein – luciferin – which glows as a result of released energy. The name luciferin comes actually from the Latin word “lucifer”, which means “light-bringer”. This whole sequence occurs in less than 12 ms [2] and is precisely controlled by the enzyme luciferase.

How effective is bioluminescence?

Dinoflagellates invest heavily in their ability to luminesce. For them it is even more important than growing, in terms of energy, although the ability to swim comes first [3]. Bioluminescence is an extremely effective way to communicate to organisms. Depending on the conditions, the bioluminescent flash can be seen from tens to hundreds of meters away [4, 5]. Even a single-celled-dinoflagellate 0.5 mm long can send a signal to a large fish 5 m away – the equivalent of a 2 m tall human being able to communicate over a distance of 20 km.

When compared to other communication methods in the sea, such as chemical or acoustic signals, bioluminescence has an advantage. Chemical signals are playing an important role in the water but they do not diffuse rapidly enough to send the acute signals across larger distances. Chemicals do have the advantage, however, of operating between nonvisual organisms, where bioluminescence is ineffective. Acoustical signals are transmitted extremely effectively in the sea [6], but they have a drawback of being relatively nondirectional. Thus bioluminescence is one of the most effective ways for small organisms to communicate efficiently to a much larger organism in the sea. It is an important warning or defence system of preys to predators.

What is the biomimetic potential of bioluminescence?

If you thought of an organism with an inserted gene to produce the protein luciferin, which is then glowing, you are wrong. This type of research belongs to the field of biotechnology, while Biomimetics does not use any living organisms for innovation. Only the functional principle is transferred into pure technology. A jacket that glows when you go running in the dark, roads that shine due to vibrations of a passing car would be some possible examples. In biotechnological means, the glow-in-the-dark concept has been around for a while. Genetic material from fireflies is modified to produce light-yielding enzymes that can ultimately be inserted into genomes of plants and therefore they can glow [7]. You can also put together the manipulated luciferase enzyme and the protein luciferin to the nanorod’s surface and will shine [8].

The biomimetic approach to luminescence would be to create light without using enzymes or proteins. It would be the conversion of chemical reaction directly into light, without any power source, like jellyfish do in the deep ocean. It is generally called chemiluminescence. A simple example of chemically produced light are glow sticks, where two chemicals are mixed and combined with a dye. By mixing, a chemical reaction takes place, yielding energy that excites the dye, which then relaxes by releasing a photon (= light). This light cannot be turned off, it is only a short-time light and can only be used once.

A step further in developing a biomimetic innovation based on bioluminescence would be to upgrade such chemical process in a controlled system where the intensity and duration can be regulated. If it’s possible to make it even reversible and repeatable, this would already resemble to the luminescence of living organisms quite a lot. The question now is, how much of that is practically possible? Maybe you know about some current research related to that. We would be glad, if you share this with us.


Moving towards the LIGHT. The secret of the sunflower