Who doesn’t know the famous lotus plant Nelumbo nucifera? If you type down the word „Biomimetics“ in Google pictures, you get this plant as one of the first results. It’s a typical example of biomimetic products because the self-cleaning façade colour (Lotusan© – video ) has been produced based on lotus‘ superhydrophobic surface.

The largest biological interface on Earth are plant surfaces that developed during millions of years of evolution. High diversity is related to their adaptations to the environment. Natural design on nano-scale is incredible, superhydrophobic or superhydrophilic surfaces are achieved via formation of cell or multicellular structures. Since the beginning of this millenium, plant surfaces serve as a great inspiration for technical applications. A lot of research has been done concerning this topic and the following article of Kerstin Koch and Wilhelm Barthlott is summarizing it well [1].

How nature is doing it…..

The main categories of artificial biomimetic materials based on surface characters are water-repellent, self-cleaning materials (lotus leaves as a role model) and water-loving, drag-reducing materials (such as shark skin).

I don’t want to write now about how nature is creating these structures and how we are trying to mimic them with our technology. I want to point out the transition of taking natural principles into human technology which cannot be copied easily. And for me the most interesting thing is that in some cases we can actually do more than nature is capable of  (or maybe we just don’t know yet and we feel smart). I will try to explain it in relation to self-cleaning surfaces. Natural self-cleaning surfaces are superhydrophobic, which means that dirt is removed by rolling water droplets on the surface. On the other side, superhydophillic interfaces enable very efficient wetting which has an advantage for certain plants; no drought-induced stress and continuous nutrient/ water uptake. This principle is very interesting for several applications where surfaces should naturally dry out quickly and prevent fogging – windows, mirrors, shower screens,…

The other way around……

But what happens when chemical engineering achieves to create even more sophisticated self-cleaning properties of a surface? A surface that can also clean fat and biological microfilms by itself? And this actually exists – it’s called photocatalysis. Chemical engineers have achieved to create a transparent nano-layer which is superhydrophillic and mineralizes organic molecules to their mineral form (CO2 and minerals). Photocatalysis is a type of catalysis where photons are absorbed by a substance that modifies the rate of a chamical reaction without being altered or consumed in the end. A typical natural photocatalyst is chlorpohyll of plants but the most common man-made photocatalyst is nano-sized TiO2 (titanium dioxide). Photocatalytic activity depends on creating electron-hole pairs which generate strong radicals (e.g. hydroxyl radical •OH or superoxide ion O2–). These strong oxidative agents and generated holes can breakdown the organic matter (bacteria, viruses, moulds, pollutants, fat,…) to carbon dioxide and water (the whole mechanism is presented on the following scheme). 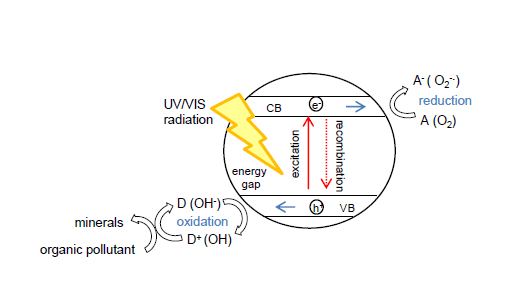 Photocatalytic processes on a nano-TiO2 particle [3]

Titanium dioxide needs ultra violet light in order to get activated [2] due to its large bandgap (Eg = 3.2 – 3.0 eV) which is a disadvantage compared to chlorophyll. Ultraviolet light represents only 5% of solar spectrum what means reduced efficiency of TiO2 under normal atmospheric conditions. Photocatalytic activity of TiO2  has first found its application as one of advanced oxidation techniques for air and water purification but lately, after the discovery of its superhdyophillic effect when irradiated, also as self-cleaning, anti-fogging and anti-bacterial surface. Many studies have already been done with different application. Here for example, you can read about improving the efficiency of photovoltaic panels with self-cleaning coating (btw, this was my very first scientific publication 🙂  [3]).

With current technology we are far away from exactly mimicing natural structures (even though we’re coming closer with 3D printing) but we can combine different principles to create something non-existing in nature and it also works. Techniques, materials and knowledge will evolve much in future, therefore the Biomimetics has good chances to bring up smart solutions.


How to abstract a biological system to an easy experiment

A Floating Turbine – Article Series Part I: The Flight of Albatross – Paper Overview