Insects, bugs, creepy-crawlies. You either love them or hate them, but one thing is for sure – they are everywhere. Throughout their 480 million years of existence, insects have evolved to thrive in almost every niche imaginable, from the extremely hot Saharan desert (e.g., Saharan silver ants), to the wet aquatic environments (e.g., dragonfly nymphs, water striders), and to the dismay of many people, inside our residences and even on our very own bodies (e.g., cockroaches, ants, fleas, bed bugs). No wonder Arthropoda is the most diverse animal phylum on Earth, and insects have amassed an incomprehensible amount of bioengineering feats in order to thrive in their habitats. Scientists have begun to unravel the mysteries of how insects function in an effort to advance science and technology through “insect-inspired” applications. As an insect enthusiast, a PhD student, and a guest writer for Blogionik, I will discuss the concept of insect-inspired Biomimetics using original research articles and my personal research discoveries. To kick-off this series on insect-inspired Biomimetics, I will highlight some examples of insect ingenuity from glasswinged butterflies, Saharan silver ants, and tenebrionid desert beetles, along with their potential applications in material and polymer science.

Glasswinged butterflies can’t lie – you see right through them! 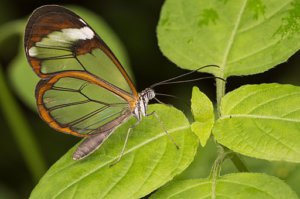 Greta oto are a type of butterfly that have transparent sections on their wings, supposedly to confuse predators when they are flying. One could also envision their wings acting as a different type of camouflage, kind of like a semi-Invisible Cloak, because full invisibility is just unfair. Now, for a surface to be “transparent,” it must have low reflection; a perfectly invisible surface would have 0% reflection (so all the light goes straight through). Common clear glass has reflection of ~8%, which is why you can see ghostly reflections of yourself when you look through the window, or why we have scenic landscapes called “mirror lakes.” Greta oto wings, on the other hand, have been shown to have total reflection of 2% over broad viewing angles [1]. Other insects have transparent wings too, like some hawk moths, dragonflies, and cicadas. Studies have shown that regularly-packed even-sized nano-”hairs” are responsible for this phenomenon, and researchers have already synthesised Biomimetic silicon surfaces with low reflectance. What’s cool about glasswinged butterflies and Siddique et al’s paper is that these butterflies’ wings use randomly sized and spaced nanostructures to produce similar optical properties.

So insects weren’t satisfied with one method of transparency – they evolved multiple ways of utilising low reflection to avoid predation. And that’s what makes insects fascinating to study: They are so prolific and have been existing for so long that they possess a myriad of solutions to one problem. In this case, glasswinged butterflies and their anti-reflective wings can inspire advancements in man-made surfaces, from solar cells with higher light capture rates to anything that relies on low-reflective glassware, like camera lenses, optical sensing, and imaging instruments.

Who knew being hairy makes you cool?

Have you ever wondered what it’d be like to wear shiny 80’s silver disco jacket and toil away under the Saharan sun? Well, if you want inspiration, look no further than the Sahara silver ants, Cataglyphis bombycina. These tough critters live in one of the hottest places on sweet Mother Earth, and scavenge on other insects that have succumbed to the heat. They forage in temperatures of up to 70°C, and while their bodies run much hotter than humans (typically 48 to 51°C), they too can succumb to the heat if the temperature passes 54°C. So how do they survive in an environment that is often hotter than their critical maximum temperature? Shi et al [2] have shown that it is a dense network of micro-hairs on the top and sides of the ants that not only produces their signature “running mercury” look (the envy of all disco goers), but also helps them thermoregulate. 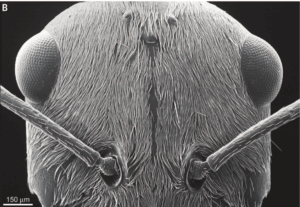 These triangular micro-hairs act in two ways: First, they reflect solar radiation in the visible and near-infrared (NIR) spectrum, like how humans use reflective shields in cars. Second, the hairs help to emit heat back to the environment by enhancing mid-infrared (MIR) emissivity, similar to how windows emit heat break our wallets in winter. There is a third mechanism, but this time it is the lack of hairs on the “stomachs” of the ants that reflects the MIR radiation from the hotter sand to the colder body of the ant. Had the ants been hairy all over, they would have reflected and emitted heat on their topside but absorbed the heat from the sand from the bottom. This three-pronged approach to combating heat can inspire self-cooling Biomimetic surfaces and devices, such as better cooling coating on buildings to increase passive cooling and decrease use of air-conditioning.

Lost in a desert? Find a beetle

Deserts are not just hot, as the silver ants can attest to, but they also experience very little rainfall. Dehydration is a danger for both insects and humans, but unlike us, some insects can collect water from their bodies and channel them straight to their mouths. Yes, it sounds crazy, but as mentioned earlier, bugs have adapted to almost every niche out there, and the dry hot Namibian desert is one of them. The tenebrionind beetles are a family of desert beetles that possess a remarkable water-collecting method: They point their bottoms to the incoming fog, tilt up to create a downward slope to their mouths, and let the water droplets roll into their mouths. Blogionik writer Anja has previously written about this mechanism in an excellent in-depth article „Strategies for water condensation and collection.“ To explain in one sentence how they work: Water from the fog collect on hydrophilic peaks, and droplets that land on hydrophobic regions roll off into a hydrophilic region, until the droplets reach the critical size to roll down into the mouth. The potential Biomimetic applications of a self-sustaining water collecting unit are enormous; towns and villages in poor developing nations with severely limited access to running water could supplement with such devices that collect water from the atmosphere; hikers can carry such a device in case they are lost without access to groundwater. One commercial product utilising the design of the desert beetle elytra was released back in 2011, called „The Airdrop“ (see story by WIRED here). Scientists have also combined the desert beetle’s approach with other inspirations from nature (cactus spines to direct the flow of condensed water, and pitcher plant surface to maximise slipperiness) to create a super-water-collector [3]. You can see the improvement in water condensation efficiency in the GIF below [3]. The scientific and engineering advancements exemplified in this study illustrate the power of Biomimetics and its potential positive impact on society.

This is just the tip of the iceberg of insect-inspired Biomimetic applications. In the next article, applications in micro-robotics and medicine will be discussed, so keep an eye out!


In Conversation With a Physicist 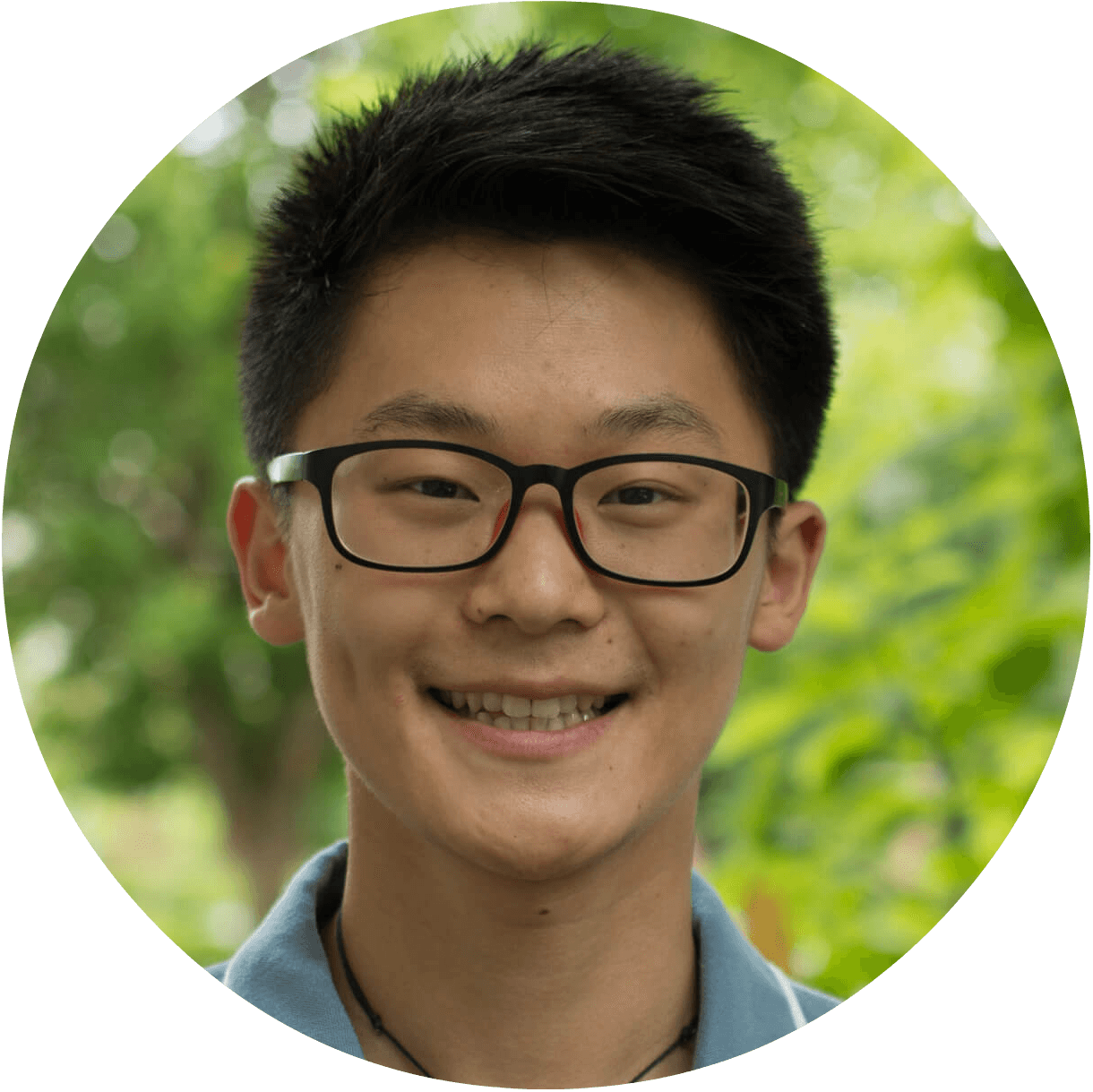 My name is Victor Kang, and I’m a young scientist and bug enthusiast from New Zealand / South Korea / USA. I received my Bachelor of Science in Biophysics & Biochemistry from Yale University, where my thesis focused on bioremediation and biofuels. From October 2016, I will be starting my PhD in Insect Biomechanics at the University of Cambridge, investigating how insects achieve amazing adhesion using highly adapted structures. Insects have been a childhood fascination for me, so I am excited to dive into research with potential biomimetic applications. As a guest contributor for Blogionik, I will introduce new studies and technologies inspired by insects with the hope of spreading awareness and interest in insect research.