Have you ever asked yourself how it is possible for migrating birds to be able to fly over such long distances in order to spend one part of the year in a more favourable environment? You have probably already seen swarms of birds flying away in a V-shaped formation, which for sure has an advantage of reduced drag per individual, but this alone is not enabling them to travel thousands of kilometers.

For the theme session of FLYING, in this article I will first write about general energetical differences between different types of locomotion (flying, running, swimming). And secondly, the power demand for flying of migrating birds will be compared to non-migrating birds, including their physiological adaptations.

What is more efficient – flying, running or swimming?

The speed at which an animal can travel and the energy cost of travelling depend on its mode of locomotion and its size [1]. Studies of metabolic power, required for different types of locomotion, showed that for animals of similar size, powered flying is the most demanding but at the same time the fastest type of locomotion compared to swimming and running. The power required for flapping flight exceeds that for running, and the power for walking is higher than for swimming [1, 2]. An important fact is that for each mode of locomotion, larger animals commonly travel faster than small ones, and they generally use less power per unit body mass [2].

With regard to speed and power requirement, large fliers travel faster than small ones in flapping flight but soaring is slower than flapping flight [2]. Flapping requires much more metabolic power than soaring, swimming or running and the power required per unit body mass is higher for small fliers than for large ones. These facts reveal, why migrations of 5 000 km or more seem to be only beneficial for birds and large marine animals (e.g. seals, whales) [3] and their physiological properties are presented hereafter.

During migrations, most bird species fly below an altitude of 1 km above ground level [4]. However, many species have been observed to fly way above this altitude, either due to favourable wind conditions or to pass large mountain barriers. One such species is the bar-headed goose (A. indicus) which is known to migrate over the Himalaya at the altitudes of around 5500 m [2]. At such heights, air density, partial pressure of oxygen and air temperature are very low. At sea level air contains 21% of oxygen, while at high altitudes it has less than 10% [2]. This means that there is much less oxygen available, and lift generation becomes more difficult.  Although drag is proportionately reduced, the resulting mechanical cost of flying increases by 50% [2].

Such species benefit from an important adaptation – they possess haeomoglobin (Hb) that has a higher affinity for oxygen than other birds [5]. When exposed to lack of oxygen (hypoxia), lowland birds need to produce more red blood cells to keep the net amount of oxygen at a constant level. This makes blood denser and consequently increases work load of the heart. Due to their special Hb, the bar-headed geese on the other hand, are able to maintain oxygen content of their arterial blood even when exposed to hypoxia, without producing more blood cells.

Another adaptation is hyperventilation, which means increased ventilation via gas exchange surfaces of the lungs. This is made possible due to large surface area of the gas exchanger, great difference in partial pressure across the gas exchanger and a small diffusion distance across the exchanger [6]. The maximum amount of oxygen that can be carried is, as already mentioned, related to the concentration of Hb.

Last but not least, the metabolic rate is a crucial parameter among the previously described physiological parameters. Migrating birds use fatty acids as their main source of energy, so they have to be transported at a sufficient rate to meet the high demand of the flight muscles. Fatty acids from lipids possess much higher amounts of energy than proteins or glycogen in the body, that is way migrating birds gain fat which is then used to fuel their journey ahead [6]. 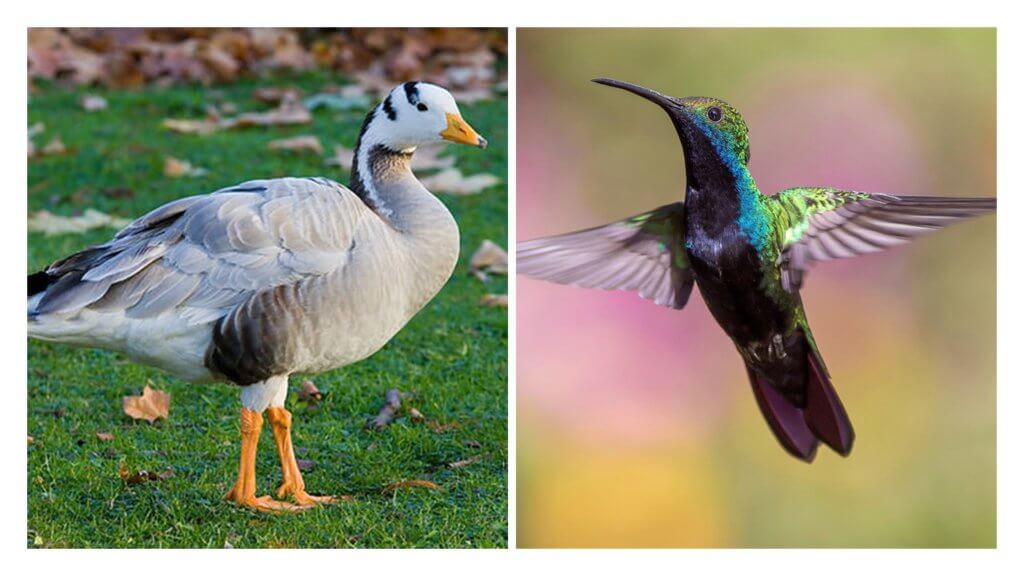 Gliding and soaring flight are energetically the least expensive, whereas any form of flying that involves and explosive burst of activity (e.g. take-off) will be energetically the most expensive. Continuous flapping has an intermediate rate of energy expenditure [9]. The metabolic rate per unit mass is greater in smaller birds than in larger ones. For example, the flight muscles of hummingbirds are known as one of the most aerobic tissues among vertebrates. It has an estimated maximum rate of oxygen consumption of 2 ml/g min, compared with 0.87 ml/g min by the flight muscles of tufted ducks [2]. This is actually the reason why hummingbirds must spend so much time foraging for food, compared to an albatross who can spend days soaring on the open sea. Hummingbirds can “afford” such high metabolic rate because they inhabit areas with plenty of food sources close to each other and can quickly replenish energy loss. And exactly the metabolic rate is what is limiting different bird species to travel large distances while foraging for food.

To conclude, flying is an expensive way of transport, looking from the energetical point of view, but at the same time the fastest way of locomotion. Many morphological and behavioural features of birds have evolved which reduce the energy cost of flight. Some examples are wing shape, the use of thermal winds, orographic lift and V-formation flight [6]. Even though migrating birds normally travel along the most energy-efficiently routes available, their physiological adaptations still play the most important role in providing a continual supply of oxygen and metabolic substrates to the muscles.